Foley is Good: And the Real World is Faker Than Wrestling (Mass Market) 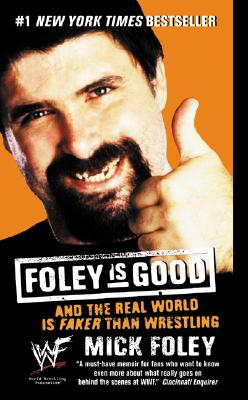 In Foley Is Good, Mick Foley -- former Commissioner of the World Wrestling Federation, aka Cactus Jack, Dude Love, and Mankind -- picks up right where his smash #1 New York Times bestseller Have a Nice Day! left off, giving readers an inside look at the behind-the-scenes action in the Federation. With total honesty and riotous humor, Mick Foley shines a spotlight into some of the hidden corners of the World Wrestling Federation. From the ongoing controversy surrounding "backyard wrestling" to the real story behind his now-infamous "I Quit" match with The Rock, Foley covers all the bases in this hysterically funny roller-coaster ride of a memoir.

Mick Foley is the former Commissioner of the World Wrestling Federation and one of its biggest Superstars. He loves amusement parks, is an American history buff, and can withstand more pain in one hour than most of us could in a lifetime. He is the author of two New York Times bestsellers: Have a Nice Day! and Mick Foley's Christmas Chaos. He currently lives in New York State with his wife and three children.