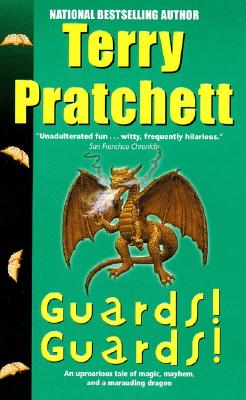 An excellent jumping off point for Terry Pratchett's prolific Discworld series! In this book we follow Sam Vimes and the City Watch as they attempt to solve a mystery and save the city of Ankh-Morpork. Pratchett's writing is witty and poignant, culminating in a story you won't be able to put down!

Here there be dragons...and the denizens of Ankh-Morpork wish one huge firebreather would return from whence it came. Long believed extinct, a superb specimen of draco nobilis ("noble dragon" for those who don't understand italics) has appeared in Discworld's greatest city. Not only does this unwelcome visitor have a nasty habit of charbroiling everything in its path, in rather short order it is crowned King (it is a noble dragon, after all...).